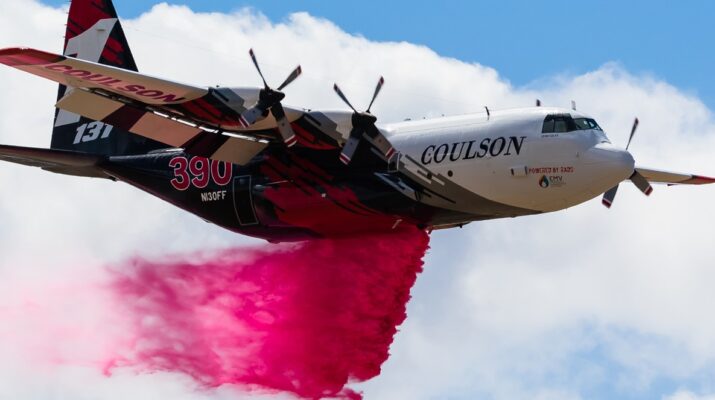 The following article will discuss aerial fire fighting in Australia and the role of Coulson Aviation in delivering an invaluable service to emergency authorities.

Introduction to Coulson Aviation and Firebombers

Coulson Aviation is a global company and leaders in aerial fire fighting and the only aerial fire fighting company operating both fixed wing and rotary aircraft. Coulson Aviation Pty Ltd originated in Port Alberni, Canada and established its Australian subsidiary in 2010 displaying its long-term commitment to its customers down under. Coulson Aviation Australia operates and maintains a fleet of custom fire fighting aircraft in partnership with the New South Wales rural fire service, conducting aerial attack fire suppression and other fire management activities. The company employs a highly experienced team of pilots and ground support staff, delivering an invaluable service to Australian states and territories, combating bushfires in difficult and treacherous conditions throughout our Australian summer.

Where is Coulson Aviation located?

Coulson Aviation Australia’s headquarters can be located at Bankstown Aerodrome in Western Sydney with operational bases in Richmond (NSW), Essendon (VIC), and Mansfield (VIC). The company has been operating in Australia for over two decades. During this time Coulson Aviation has provided extensive aerial firebombing support and technical bushfire expertise; notably the 2009 Black Saturday bushfires and more recently the 2019/2020 Black Summer which burnt over 5.5 million hectares of land. The Australian arm of Coulson Aviation was setup as a subsidiary of parent company Coulson Aircrane Ltd based in British Columbia, which has been involved in the aviation industry for over 36 years across four continents.

How do you become a fire bomber pilot?

Aerial Firefighting requires a high level of experience and training in order to carry out special missions. Pilots are responsible for managing everything from the distribution of water and or fire retardant to heavy lift operations and the transportation of emergency personnel. It is imperative that fighter-bomber pilots are detail orientated and safety conscious, adhering to all the correct safety protocols and procedures. All team members both in the sky and ground firefighters need to be working towards a common goal. Having the right attitude and being a team player are critical in the world of aerial fire fighting.

If you are thinking about a career as a fire bomber pilot there are a number of different steps to follow in order to achieve this role. Firstly getting a Commercial or preferably Air Transport Pilots Licence from an accredited training organisation and obtaining an instrument rating is key. You’ll need to decide between fixed-wing aeroplanes or helicopters. Once you have achieved this building hours becomes your main priority. Coulson Aviation prefer 2500 hours worth of experience for fixed wing pilots and helicopter candidates usually require 250 hours on the specific aircraft type they will be applying for. Fire bomber pilots have diverse backgrounds with many having experience in bush, agriculture and low-level flying whilst others have spent time in the military and airlines. There is little automation involved in being a fire bomber pilot and having a sound ability to naturally fly the aircraft with stick and rudder is essential. If you are willing to learn, have strong mental toughness and can embrace repetition without becoming complacent, perhaps you have what it takes to become a fighter-bomber pilot.

For more information on becoming an aerial firefighter you can visit the following website: https://www.coulsonaviationusa.com/newsmedia/how-to-become-an-aerial-firefighter

How many fire planes does Australia have?

Formed in July 2003, the National Aerial Firefighting Centre (NAFC) provides a cooperative national arrangement for fighting bushfires. The NAFC state that there are over 500 aircraft, provided by over 150 operators, that are available for firefighting across Australia depending on demand. Some of these are state-owned whilst others are contracted on behalf of state and territory governments. There are currently 164 aircraft contracted for the 2021/2022 Australian bushfire season of which Coulson Aviation is responsible for four. These include the Boeing 737 Fireliner, Lockheed C 130 Hercules, Boeing CH-47D Chinook, Sikorsky S61N. Aircraft are chosen for specific tasks depending on their suitability and cost-effectiveness. Having a diverse range of aircraft types allows emergency services to conduct a wide range of support operations simultaneously including firebombing, fire detection, reconnaissance, mapping, communications and the transportation of fire crews.

Follow the link below for information about aircraft contracting arrangements and Coulson’s existing Australian fleet: https://www.nafc.org.au/about-aerial-firefighting/

What are firefighting planes called?

There are several different types of firefighting aircraft, customized for specific needs, and they are classified according to their carrying capacity and function. Aircraft that are used for air dropping fire retardant or water on bushfires are known as Air Tankers whilst others are involved in transportation and support.

– Large Air tanker (LATs): Larger capacity to SEAT’s between 8000 and 15,000 litres, Higher coverage means greater efficiency, disadvantage is the requirement for longer runways and longer response time, the C 130 Hercules has been Coulson Aviation’s leading attack firebomber across the globe.

– Water Scoopers: Flying boats able to refill over large bodies of water and then drop it on a target location.

– Smokejumper Aircraft: Deliver personnel and equipment to remote locations that are only accessible by air

– Air Attack planes: Primarily used for coordinating response and tactical purposes such as aerial reconnaissance. Twin Commander 500 and 600 are most common.

How does aerial firefighting work?

Firefighting aircraft are an invaluable resource to emergency services and ground crews when tackling bushfires in an intense fire season. It is important to note that regardless of their effectiveness and capability firefighting aircraft are a support tool and are not relied upon to extinguish fires on their own. Firebombing operations dropping water, foam or flame retardant help to establish a fire edge, slowing or halting the rate at which the fire is spreading. This in turn allows crews on the ground to be more effective at engaging and suppressing the fire.

A number of weather conditions limit the effectiveness of aerial firefighting. Warm temperatures, strong winds and low visibility reduce safety margins for crews and limit their effectiveness. Under Civil Aviation Regulations firebombing operations must be conducted during the day under Visual Flight Rules. Pilots need to be able to see where they are going and avoid terrain. Operations may be halted if conditions deteriorate and become too hazardous.

How do fire planes pick up water?

Some aircraft have the ability to refill in flight. There are two methods for doing this. Helicopters utilise a bucket dip by hovering over rivers, dams or lakes collecting water before positioning to the fire site. The open topped tank has a string allowing the flight crew to release water from overhead. This procedure can be repeated multiple times without the aircraft having to refuel. Fixed-wing aircraft equipped with floats (seaplanes/flying boats) also have the capability of picking up water without returning to base. Large scoops fitted to the underside of the fuselage allow planes to fly very low across the surface, collecting water into its tanks in a few seconds. This technique requires a great amount of skill, as there is a significant change in weight and the position of the centre of gravity mid flight. In 2007 Coulson Aircrane Ltd acquired two Martin Mars aircraft, the largest flying boat in existence, in order to expand its firebombing capabilities in North America. The Bombadier CL-415 is another aircraft with this capability, nine of which are based in Ontario, Canada.

What is dropped from planes to put out fires?

Air Tanker’s soaring across the sky leaving a trail of red in its wake. It’s known as fire retardant and is often used in aerial fire fighting as a pre-emptive strike in order to slow the spread and lower the intensity of a bushfire. It is essentially fertiliser combined with thickeners mixed with water that is sprayed on the target area set in the path of the flame front. When the water evaporates the remaining chemical residue left behind prevents the vegetation from igniting. The recognizable red colour is caused by iron oxide that is added to the mixture so firebomber pilots can see what areas have already be sprayed.

Water on its own and fire foam can be applied directly to a blaze from above to fight fire, whilst fire retardant is dropped on vegetation that isn’t already burning. This control method deprives the fire of further fuel for burning; preventing or slowing combustion, ensuring that plant life will not catch fire. Risk assessments carried out in the United States and Australia have shown that if accidentally exposed to fire retardant during application the risk of negative health side effects are low.

For more information on fire retardants and there health effects you can visit the Victorian health website here: https://www.health.vic.gov.au/environmental-health/fire-retardants-and-health

How much do fire bomber pilots make?

On going demand for fire bomber pilots is increasing. According to the US bureau of Labour Statistics the job prospects are strong with an estimated 6% growth expected between 2019-2029. Salaries as a fire bomber pilot differ depending on aircraft type and seniority. On average, salaries for fire bomber pilots range between $70,000 to over $100,000 with senior captains of large tankers having the capacity to earn greater still. Contract single engine air tanker pilots are commonly paid by the hour of flight time. This means income is changeable but during a busy season can be quite lucrative with awarded contracts in the hundreds of thousands.

Many aerial firefighters also enjoy the flexibility of working seasonally taking time off during the winter. However, with peak demand increasing in the southern hemisphere for aerial fire services, including countries like Australia and Chile, and longer fire seasons, it is inevitably becoming a full time occupation.

Development in aviation technologies and the customisation of superior aircraft have made aerial firefighting an extremely effective method for combating bushfires. The strategic use of multiple aircraft in collaboration provides an invaluable resource to emergency services allowing various operational tasks to be performed alongside ground crews to meet peak demand.

Coulson Aviation has been at the forefront of this industry, and have successfully operated firebombing for over 20 years continuing to lead the way in aviation innovation, safety and professionalism. It has become Australia’s most advanced and reliable provider of state of the art firebombers, pilots and support staff, with proven aerial firefighting capabilities.

Coulson Aviation Australia continues to support governments and territories during times of crisis to protect communities, infrastructure, wildlife and land from bushfires.